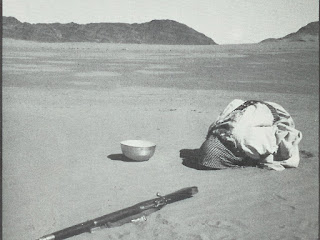 by Larry Powell Is the potent "trio" of war,  climate change and religion taking a toll on the world’s most vulnerable? Famine, drought and food insecurity have plagued Yemen, the poorest country in the Arab world, even before the outbreak of open warfare there in 2015. Since then, thousands have died in the conflict. Millions more face famine and imminent death from drought and starvation. Saudi Arabia has been bombing its little neighbour for some time now, in a conflict fed by sectarian hatred. Some of it has to do with which of the warring factions within the country believe in which branch of Islam, Sunni or Shi'ite. (Or which subdivision of which branch.)  As in much of the rest of the world, religion and war are paramount - at the pinnacle of what it apparently means to be "human."  This photo depicts a Yemeni fighter praying (in the 1960s.) Photo by  Dr. Ulrich Middendrop But the World Health Organization (a branch of the UN) says the w
Post a comment
Read more
More posts