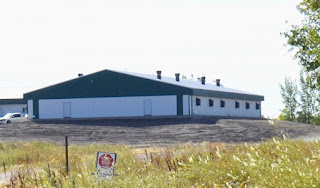 by Larry Powell What the fuss is all about. A PinP photo. The mayor of the RM of Yellowhead, Don Yanick is denying yesterday's headline story in the local newspaper, Crossroads This Week,  (see CTW story, below). It reads,  "Hog Barn Found to be Legal."  First of all, says Yanick, Council will not be declaring the operation "legal," even if an inspection clears the owner. (It will simply be allowed to proceed.) So, the bottom line is, the matter is still pending and will be discussed again at the next council meeting on Oct. 23rd. The building in question is a "finisher barn," where mature hogs are prepared for market. It's located in the eastern part of the RM, near the Village of Strathclair.  It became controversial when the citizens' group, Hogwatch Manitoba, brought a formal complaint in September to the Yellowhead council. The complaint alleged the owner, Wim Verbruggen, had built a larger barn than stated in his original ap
2 comments
Read more
More posts