European parliament approves curbs on use of antibiotics on farm animals

- October 25, 2018
TheGuardian Move is aimed at halting the spread of ‘superbugs’ resistant to medical treatment. Details here. RELATED: Starting this December, Canadian farmers will need a prescription to obtain veterinary antibiotics for their livestock. According to a retired University of Guelph professor, John Prescott, the federal regulatory changes mean the agriculture industry will be required to play its part in reducing the use of antibiotics here and around the world. More here.
Post a comment
Read more

The owl, the mouse and the murrelet. How manmade climate change could be pushing species to the brink in ways rarely imagined. 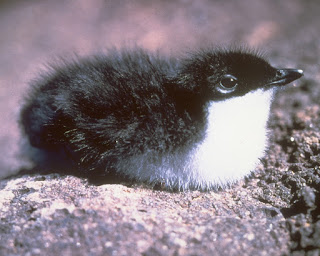 by Larry Powell A Scripp's murrelet chick ( Synthliboramphus scrippsi) . Humans hunted its cousin,  the Great Auk, to extinction in the 18 hundreds.  A U.S. Nat'l. Park Service photo. A new study finds, complex changes in climate are threatening yet another species - this time a little diving seabird known as the Scripp's murralet (above). But this time, it isn't because of direct impacts  from severe weather events, as is often the case. Rather, it is how those events are interfering with traditional interactions between a predator, the barn owl (below) and its two main prey, the deer mouse and the murralet. The three species breed on the channel islands, off the coast of California. The study focused on Santa Barbara, the smallest. Barn owl (Tyto alba). Photo by Peter K. Burian. In-depth research by two American and two Canadian scientists, documents a fascinating but insidious train of events that could  be leading to the little seabird&#
Post a comment
Read more
More posts