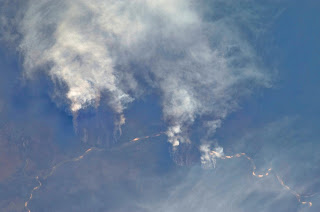 Science Slash-and-burn  forest  clearing along the Xingu River in  Brazil . A NASA satellite photo. Beset by economic woes and dissatisfied with the left-wing politicians in power for most of the past 15 years, Brazil appears poised to make a hard turn and elect a far-right candidate, Jair Bolsonaro, as its next president. His rapid ascent has unnerved local researchers, who worry about the future of Brazilian science, the protection of the country's biodiversity, and its role in the global struggle against climate change. Bolsonaro has vowed to withdraw Brazil from the 2015 Paris agreement, which requires nations to reduce greenhouse emissions to combat climate change, and he plans to eliminate the Ministry of the Environment and fold its duties into the Ministry of Agriculture, Livestock, and Supply.  Download the PDF here.
2 comments
Read more
More posts