Hurricanes have become bigger and more destructive for the U.S. and Canada, study finds 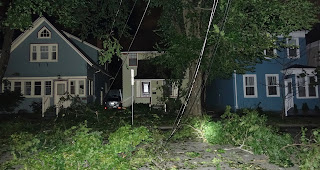 Phys Org --> A new study at the University of Copenhagen shows that hurricanes have become more destructive since 1900, and the worst of them are more than three times as frequent now than 100 years ago. A new way of calculating the destruction, compensating for the societal change in wealth, unequivocally shows a climatic increase in the frequency of the most destructive hurricanes that routinely raise havoc on the North American southern and east coasts.  Story here. After its ravages through the Bahamas, Dorian proceeded along the coasts of the  Southeastern United States  and  Atlantic Canada ,  (above) leaving behind considerable damage and economic losses in those regions.   Photo by  Coastal Elite Halifax, Canada
Post a comment
Read more
More posts