It looks like my local government, the RM of Shell River, is pressing ahead with secret plans for a sewage lagoon with no intention of looking at alternatives.

It's now been a month since a Manitoba company, Blue Diamond Technologies, briefed a meeting of the RM Council. Blue Diamond has invented a system to treat and purify both hog and human waste, using a patented chemical process. Company officials are confident their technology is cleaner, greener, less stinky and even cheaper (possibly much cheaper) than an old-style lagoon!

(See "Company offers new way to deal with human waste" in the May 29th edition of "The Review," p. 9. Please read!)

Just today, one of those officials told me,  they are still waiting to hear back from the RM, in terms of doing a follow-up or taking a closer look!

My elected representatives also seem just as determined as ever to keep information about the new lagoon from the public. They have now officially refused my request, under the Freedom of Information Act,  for results of soil-tests done on a potential lagoon site some time ago. Why? Because, "This information has not yet been discussed in open session and therefore cannot be disclosed...."

The soil tests were done in March. And I know there has been at least one "in camera" (secret) meeting on this since. (An informed source told me the drill truck struck water on the first try. I'm no engineer, but that can't be good can it?) If the soil there is not suitable, will the RM seek another site, or will it actually take the heroic step of installing a million-dollar liner, to prevent leakage?

As a result of their refusal, I will now file an official complaint with the Manitoba Ombudsman, as provided for under the Act, to get some answers.

A recent editorial in "The Review," points out, Manitoba is introducing legislation to address secrecy and lack of accountability on the part of local governments across the province and suggests this may be timely, given recent events here. (If you haven't read it, please do! It's in the May 22nd issue.)

It is regrettable that legislation is needed to make sure democratically-elected local governments do what they should be doing, as a matter of course. It just seems so basic. "Do public business in public!"

Sadly, it's not just the lagoon, it's the way council has handled the issue, that worries me.

Reeve Albert Nabe can't vote or discuss it at meetings because he owns the quarter where the tests were done, so has a conflict-of-interest. Councillor Jack Lenderbeck can't either, because he rents land from the Reeve.

That leaves a rather important decision on a major capital project to the remaining four councillors.

I'm also a bit puzzled at the seeming lack of public interest here.

There are plenty of folks in these parts who love fishing, boating and owning a waterfront property. There are others working actively to promote the Roblin area as a tourist destination. Are you OK with the prospect of another old-style lagoon? Experts say these facilities often leak, contaminating groundwater. (One of those experts, Prof. Bill Paton of Brandon University even claims, "I have not found any Manitoba lagoons that meet effluent license requirements." Quite a statement!)

According to the Lake of the Prairies Conservation District, phosphorous buildup in our waterways has been causing fish-kills and compromising drinking water quality for years. Do we really want to make these problems worse, or find better ways of dealing with them? 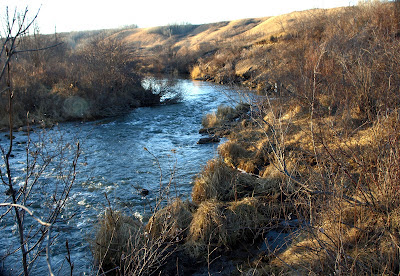 Boggy Crk. possible future "drain" for sewage effluent. PLT photo
If the lagoon goes ahead, a pipeline would apparently drain the effluent from there into beautiful Boggy Creek (above), where I fished, myself, when I was a kid, then, into Lake of the Prairies.

Isn't that where a lot of you fish, or own cottages? Do you want that effluent to be as clean as it can be, or just "good enough," as seems to be the present mentality?

I'd love to hear how you "Bug-Chuckers," or anyone else for that matter, feel about this!

If you decide you'd also like some answers from the RM, here is some contact information which may help.

While you're at it, ask them why the minutes from their April 13th PUBLIC meeting, have not been posted on their website yet!