Showing posts from November 1, 2012
Show All 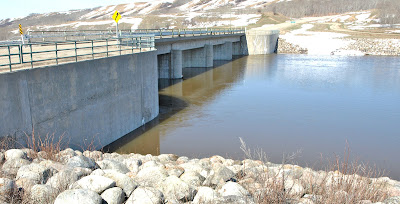 Dear Editor, I never thought I'd say this. But I may be lucky to be living in a riding represented by a Member of Parliament on the government side, (Robert Sopuck - Dauphin/Swan River/Marquette) after all. I say this because the government Mr. Sopuck represents, under Stephen Harper, has decided the Assiniboine River, one of millions of lakes, rivers and streams in Canada, is among the very few designated as "protected" by its new, "Navigation Protection Act."  (It happens to flow through Mr. Sopuck's riding.)  Shellmouth Dam on the Assiniboine. Could it now be harder to approve such structures in Tory ridings - but easier elsewhere? PLT photo. The Assiniboine forms Lake of the Prairies, a popular area for cottagers and boaters, just a few clicks west of where I live. This protection means that ice-fishers, anglers and pleasure boaters will keep their historic right, which dates back to Sir John A. himself, to navigate the river without having to
Post a comment
Read more
More posts