as well as the site nominated for the UNESCO world heritage site.
Government of Manitoba.
No New Peat Licences in the Province Until Peatland Stewardship Strategy in Place 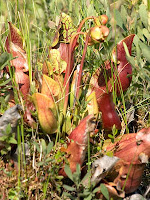 "I am proud of our record on parks and protected areas.  Seven million hectares of land, which amounts to almost 11 per cent of the province, are already fully protected and we will continue our work on reducing industrial developments in parks," said Mackintosh.  "While I recognize the value of more jobs and continued economic growth in Manitoba, there will never be a peat mine in a provincial park."
The province and Sun Gro Horticulture Canada have reached an agreement that will see Sun Gro give-up its five current peat leases in Hecla/Grindstone Provincial Park and withdraw the associated Environment Act licence application.  The agreement includes a $492,000 payment to reimburse Sun Gro's expenses for past lease payments and related exploration and legal costs.  "Sun Gro has always been an advocate for responsible peatland management and supports this decision for the protection of provincial parks in Manitoba," said Bob Sytsma, a vice-president with Sun Gro.  "We are very committed to collaboration on developing sensible strategies and processes for the peat industry and the province."Mackintosh said, now that the leases have been removed from the park, the government will also begin public consultations on changing the land-use category of the Grindstone area of the park to protect it from any commercial developments, adding it to the province's network of completely protected areas."Freeing our provincial parks from peat mining is a reason to celebrate for all Manitobans," said Ron Thiessen, executive director of the Manitoba chapter of the Canadian Parks and Wilderness Society.  "It's a huge leap toward ensuring our parks are healthy for future generations of wildlife and people."While the government continues to work closely with the industry to develop a first-in-Canada peatlands stewardship strategy, which is expected to be introduced in the legislature this fall, the minister said the province would also implement two strict interim peatland protection measures:     * Suspension of any new Environment Act licence applications or approvals for peat mining operations in the province until the stewardship strategy is implemented.  (This suspends the possibility for peat mining on the 48 existing peat leases in the Interlake but will not apply to the one outstanding licence application for peat mining in the Interlake by Sunterra, which is currently undergoing an environmental review and consultations with Aboriginal communities.)* Extension of the moratorium on 118 pending or any new peat leases until the stewardship strategy is implemented.  (This goes beyond the moratorium's original end date of June 16, 2013.)The minister also announced unprecedented licence restrictions for Environment Act licences that have been approved and granted for two peat operations near Riverton, Ramsay Point by Sun Gro and Deer Lake Bog by Berger Peat Moss Ltd.  The two operations are at a distance of between 0.5 and 1.5 kilometres from the west side of PTH 234.  There are now 89 restrictions as a result of the appeal process, of which 14 are new or strengthened, notably implementing zero tolerance for net impacts to Lake Winnipeg, allowing the harvest of only one-third of the lease in the first decade and an additional onethird for the remaining lifetime of the development, creating an historic 150-metre setback from water and wildlife habitat, and implementing new rules on trucking times including banning trucks on PR 234 on summer weekends and after 3 p.m. on Fridays.  Mackintosh said the province will partner with Sun Gro and Berger to make the two licensed operations world-leading in terms of best practice models for bog restoration and mitigation.The minister also released a peer-reviewed study by the International Institute for Sustainable Development (IISD) on the cumulative impacts of Interlake peat mining on Lake Winnipeg and on climate change.  The report shows peat mining's impact on nutrient loading to the lake can be completely mitigated."With the health of Lake Winnipeg at a tipping point, I will not allow any new pressures to be introduced," said Mackintosh.  "That means there will be zero tolerance for any new net nutrient loading to the lake.  The IISD research shows this is achievable and we will ensure it through unprecedented licence restrictions."Peatlands cover more than one-third of Manitoba's landscape.  Almost four million tonnes of new peat accumulate every year in the province, while less than 150,000 tonnes are harvested annually.  The IISD release confirmed that peat harvest results in greenhouse-gas emissions. The minister said Manitoba Conservation and Water Stewardship will begin consultations this year with the peat mining sector to develop an industry-wide approach to mitigating greenhouse-gas emissions."Because our peatlands are a carbon sink, they provide significant climate-change benefits to Manitoba and the rest of the planet," said Mackintosh.  "Our peatlands stewardship legislation will set out longer-term policies for the peat industry including a carbon offset and mitigation program as well as no-go zones for peat developments and greater opportunities for Aboriginal benefit sharing."Complete licence conditions for the Ramsay Point and Deer Lake Bog peat operations are available at www.gov.mb.ca/conservation/eal/archive/2011/licences/2964e.pdf and www.gov.mb.ca/conservation/eal/archive/2011/licences/2969e.pdf. The complete IISD study is available at:www.iisd.org/publications/pub.aspx?pno=1753. - 30 -
Parks Wilderness