The War on Weeds 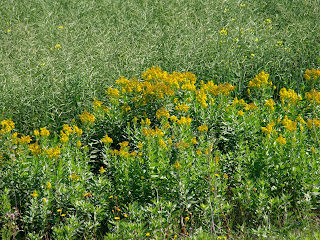 The Dominion - News From the Grassroots Canada Goldenrod - a favourite food plant for pollinators - one of the  hundreds  of "weeds"  on Manitoba's hitlist for eradication. PLT photo Manitoba farmers grapple with impacts and legality of municipal herbicide use. Full story here.
3 comments
Read more

Climate Change and the CNR.

Are the two already on a collision course, with Canadian train travellers caught in the middle? by Larry Powell  Uneventful?  Forgettable? Our Via Rail trip from Winnipeg to Toronto this week, would hardly fall into either of those categories. First,  as we waited to board,  our train, The Canadian, was over two hours late arriving at the Winnipeg station from the west.  Larry on a less "eventful" ride  to  Toronto a few years ago. PLT photo. Some of the  passengers who got off there made mention of white-out conditions before their arrival. But others seemed to think the delay was  mainly due to the number of freight trains they had to yield to by pulling over and stopping on sidings along the way. The CNR owns the rail line so their freights always have the right-of-way over trains carrying passengers. This has been the case for many years, so that part has not changed. What seems to be changing is the frequency and duration of those stops. For example,
Post a comment
Read more
More posts