The Former Leader of the Green Party of Manitoba, James Beddome, is Elected Again at Successful AGM, and Policies Passed to Protect Manitobans from the Energy East Pipeline
November 15, 2014 (Winnipeg, MB) 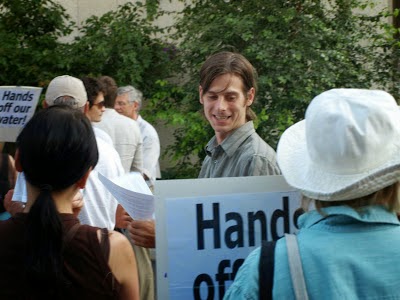 Beddome at a protest against water privatization by the City of Winnipeg a few years ago.
Larry Powell PinP photo.

The Green Party of Manitoba (GPM) elected a new Executive Council at its Annual General Meeting (AGM) today, including the election of former Party Leader James Beddome back to his former position after stepping down a year prior.
Beddome received approximately 68 percent of the votes cast by individual GPM members, with challenger, organic farmer Kate Storey receiving 32 percent.
“I am excited to once again serve as Green Party of Manitoba Leader. Frankly, I missed politics too much, and I look forward to leading the Party into the next election when we will elect Green MLAs to the Manitoba Legislature. I want to congratulate Kate Storey on a well run campaign. I look forward to continuing to work with her on Executive Council and as a candidate in the next provincial election,” said Beddome.

In addition to the election of a new Executive Council, organizational and policy amendments were dealt with.
Notably, the GPM passed a policy affirming opposition to the Energy East Pipeline, and requiring that in the event the pipeline is approved that the GPM would protect Manitobans by requiring companies to pay into a provincially administered contingency covering the potential liabilities from spills. Converting decades old natural gas pipelines, to carry diluted bitumen parallel to existing operational natural gas pipelines, as is proposed, presents a huge risk in the event of spill or explosion, and further contributes to climate change.
“Greens understand that a responsible economy does not promote short term gain at the expense of severe and debilitating long-term pain. We need action on climate change immediately! The current Manitoba Government has no credibility in dealing with climate change. This decades old government promised to reduce emissions 6 percent below 1990 levels. They even passed a law promising to do it, but we all know what they do with promises they enshrine into law,” stated Beddome.
-30-
Read related posts here.
at 11:59 No comments: Links to this post