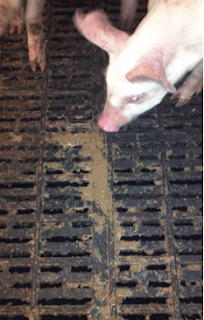 by Larry Powell  Here is an important update to this story . (Warning, the words and images in this story are graphic.) We all know that farm animals can get sick. But how many of us are aware of just how damaging animal epidemics can be - whether on the other side of the world or on our own doorstep? They can and do cause huge economic losses and harm to the health of animals and humans, alike. And, there’s ample evidence that, for generations, the model we’ve been using to raise animals in confined, crowded conditions, only magnifies the problems. So why is the Manitoba government    prepared to risk even more of the same by massively expanding pork production in a province with an already-large industry? I hope this part of my series will move you, the reader, to ask, “How much worse must things get, before we change course?”   Losses suffered globally due to diseases of livestock, are staggering. As the Nairobi-based International Livestock Research Institute (ILR
5 comments
Read more
More posts