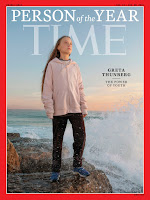 So I guess the bully-boys of the world's petro-states sure have Greta Thunberg on the run now. Apparently their "eyebrows were raised" because the 16 year-old schoolgirl suggested global leaders be put "up against the wall" for their lack of action on our climate crisis. I guess they were terrified Greta was going to unleash her standing armies against the likes of Saudi Arabia's murderous Crown Prince and Brazil's homophobic, rainforest-destroying (and Trump wanna be) President. Apparently Saudi Arabia, busily killing children in Yemen as we speak (quite possibly with the help of Canadian-made weapons), and Brazil, whose leader fires scientists for telling him the truth - that his policies are committing Brazilian rainforests to death by wildfire - were major hurdles in the way of any meaningful progress at the recently-failed environmental summit. (Canada's own role, I might add, was weak, unconvincing and disgusting.) So, should leaders like this be "put up agains the wall," as Greta suggested? She has apologized, saying she was not advocating violence. And I believe her. But consider this.Surely the increasingly deadly storms that our children will now face, due to this latest proof that our leaders have no backbone, will prove way more violent than anything Greta is accused of suggesting.