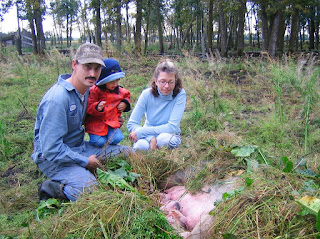 In the fall of 2006, Loyd Burghart told his story to "Planet in Peril." Burghart, a livestock farmer in the Swan Valley of western Manitoba, said he, his wife, Donna and their four children inhaled fumes from the chemical, Lorsban (chlorpyrifos) which a neighbour had been sparing on a nearby crop. ( Many farmers in that part of the province had done the same that year, in an effort to control a severe infestation of  Bertha Army worms.)  Some time after the incident, Burghart, his wife  and one of their children,  pose by a mother sow and  piglets in their yard.  A PinP photo. The spray had left Burghart's entire family with severe symptoms. He says he, himself, was left writhing with severe pain in his eyes.  It's not immediately known how many other Canadians have suffered in similar incidents. But it's hard to believe this was the only case. ( Burghart was also worried how the chemical might impact the health of his animals and their feed.)
Post a comment
Read more
More posts