PLT Slams Manitoba for its Blasé Attitude Toward Arsenic

Why is the Government of Manitoba clinging to its monumentally callous practise of releasing arsenic into the environment?

After all, the deadly nature of the poison is hardly a deep, dark secret.

Have Premier Selinger and his Minister responsible for the environment, Gord Mackintosh, never heard of the Borgias? They're the infamous Italian family who rose to power in the Church, using arsenic to murder people for their money and property. And that was way back in the middle ages.

Known even then as "The King of Poisons," a single dose the size of a pea was said to dispatch a victim with "violent abdominal cramping, diarrhea, vomiting and shock."

Has no one with our provincial government ever read the classic, groundbreaking book, "Silent Spring?" It was written back in the 60s, but has well stood the test of time. In it, its highly-respected author, Rachel Carson reminded the world that arsenic found in chimney soot in England two centuries before, was carcinogenic. It caused cancer. Carson wrote further, "Epidemics of chronic arsenical poisoning involving whole populations over long periods are on record. Arsenic-contaminated environments have also caused sickness and death among horses, cows, goats, pigs, deer, fishes and bees." 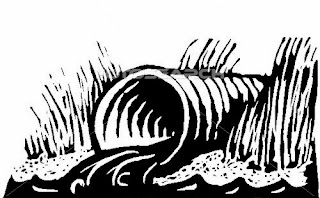 Yet the Manitoba Government will not budge from its decision to allow the Town of Virden, in the southwest, to release arsenic it has captured from the town's drinking water supply into Gopher Creek, a tributary of the Assiniboine River. That river, in turn, flows through many communities downstream, including Brandon and Winnipeg.

The government has stubbornly dismissed repeated pleas by a concerned resident of the area, John Fefchak, to find a method of disposal for this "captured" arsenic other than simply dumping it back into the environment. Sadly, his repeated letters-to-the-editor on this issue, seem to be falling on deaf ears. The province continues to cling to the outdated notion that the arsenic levels involved are so small, there is no cause for concern - that "the solution to pollution is dilution!"

This assumption is, at best, just plain unscientific.

For example, an American molecular toxicologist, Joshua Hamilton, recently stated that those who ingest only 10 parts per billion (ppb) over a lifetime, an incredibly tiny amount, "increase their risk of disease substantially." (Manitoba’s water standards allow 10 ppb each day. Virden has yet to meet that standard.)

And, in 2011, a team of American university researchers reported the results of a study of almost 12 thousand men and women in Bangladesh. It found a relationship between arsenic exposure and death from heart disease, "at a much lower level of exposure than previously reported."

Even Health Canada, not always the staunchest defender of the public health, saw fit to cut back some time ago on the amount of arsenic it allows in drinking water.

Meanwhile, Manitoba, by contrast, maintains an attitude respecting this deadly poison which can only be described as strangely cavalier.

john Fefchak said…
PLT..ONE big question that comes to mind in all of this….Why is Conservation/WaterStewardship calling the shots on what is taking place; I think Manitoba Health has a role to play and also take up the challenge of what is happening at Virden …It is not
right, nor is it ethical to the principles of well being
for the sake of the public. Present and future generations
December 2, 2013 at 12:38 PM

John Fefchak said…
Province's Arsenic Attitude.
It would be nice if the Manitoba government paid more attention to the perils
of toxic substances instead of just issuing warnings to the public. Their cavalier recognition and dealing with arsenic requires a serious tune-up.
December 3, 2013 at 8:18 PM

John Fefchak said…
ARSENIC diluted, is far from harmless. To do this is plainly stupid and ethically, irresponsible.
December 8, 2013 at 11:57 AM