- January 05, 2014
UpInspire This 3rd grader shocked everyone with her experiment that shows the difference between organic and conventional. It changed my mind forever. Watch video here.
1 comment
Read more 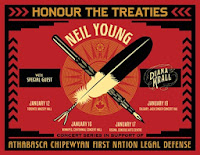 Neil Young  has announced that he will perform  four benefit shows in his native Canada to raise  money for the Athabasca Chipewyan First Nation  (ACFN)   Legal Defense Fund . The   “Honour The Treaties”   Very Special Guest,  Diana Krall  will also perform. The  ACFN  refer to themselves as K'ai Taile  Dene, meaning "people of the land of the willow.”   A Legal Defense fund was set up to support the ACFN’s legal challenges against oil companies and government that are obstructingtheir traditional lands and rights. As people of the land theACFN have used andoccupied their traditional lands in the Athabasca region for thousands of years,hunting, trapping, fishing and gathering to sustain themselves and continue spiritualcultural rights passed down through generations. The ACFN’s legal challenges will ensure the protection of their traditional lands, eco-systems and unique rightsguaranteed by  Treaty 8 , the last and largest of the nineteenth centur
Post a comment
Read more
More posts