OCCRP
A subsidiary of the Canadian mining company, Gabriel Resources, is under investigation in Romania for money laundering and tax evasion. According to The Organized Crime and Corruption Reporting Project (OCCRP), Romanian prosecutors have opened a criminal investigation into Rosia Montana Gold Corporation (RMGC). It holds a license to exploit the largest open-pit gold mine in Europe. The project has been stalled in recent years amid widespread protests throughout eastern Europe, mainly from people concerned about its environmental impact. 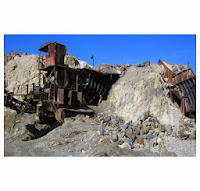 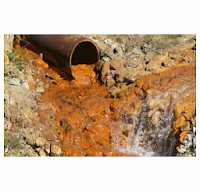 These photos show the kind of environmental mess created by mining which has gone on in the area since the time of the Romans. (l.) An old mine machine crumbles into dust. (r.) Acid rock leakage seeps from a drainage pipe. Gabriel says it will clean things up because it is committed to "responsible mining and sustainable development."  (Photos by Gabriel Resources.)

The proposed mine is no stranger to controversy. Thousands of Romanians have been protesting in recent months against what they believe is an environmentally risky project, possibly plagued by political corruption, as well. Mine officials have said little publicly, except to claim they are not the direct targets of the investigation.

RMGC has also strongly denied accusations against it in Romania that it falsified certain maps of the area. It has launched a defamation suit to counter the accusations but does not elaborate on them further.

The parent company, Gabriel Resources, is listed on the Toronto Stock Exchange. It owns over 80% of RMGC, the rest by the State of Romania. Gabriel believes it can still extract more than US$24 billion dollars worth of precious metal at the ancient mine site in an environmentally responsible way, creating thousands of jobs at the same time.

(OCCRP is an investigative reporting agency designed to help residents of Eastern Europe and Central Asia "better understand how organized crime and corruption affect their lives.")