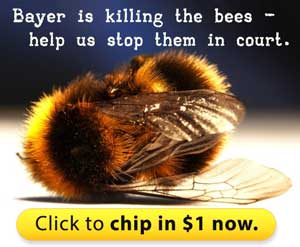 Larry,
Bayer is suing Europe to overturn the landmark ban on bee-killing pesticides -- and we're excited to announce we're joining the legal battle to make sure Bayer fails.
Europe's bee-saving ban has only just gone into force, but Bayer is fighting in the courts to overturn it. If Bayer wins, it will be a huge setback for the bees -- and so we're asking the European Court of Justice to let us join in the case and defend the ban.


The first hearings could happen in just a few weeks, and we've only got a few days to finalize our case. If the court accepts our application, we'll represent the interests of hundreds of thousands of SumOfUs members who have already spoken up -- and make sure the court has real evidence to counter Bayer's propaganda.
It's crucial we make our voices heard in the court and on the streets. We’ve already made a downpayment to hire European legal specialists to help us fight the case, but we know Bayer and Syngenta are going to throw everything they’ve got at defeating the bee-saving ban. That's why we need to stand ready to fight Bayer every step of the way-- no matter how long it takes.
We've already asked for a lot, so understand if you can't give now. But if you can, can you help us fight Bayer and Syngenta inside and outside the European Court by making a $1 donation to our ‘Save the Bees’ fund?
The upcoming court case is more than just a European battle -- this will be seen as a test case around the world. That’s why hiring a crack team of EU hotshot lawyers is so important. Winning at the European court could mean helping to save our bees around the world. But if Bayer and Syngenta manage to overturn the EU’s ban, then there’s a good chance that we might fail to get neonics banned elsewhere.
And we're not stopping with the EU court battle. Just last week, we worked together with partners leading the fight in the US to sign on to a major advertisment in the New York Times calling on the US to act, we've taken out ads in commercial garden magazines, and taken the fight to the world's largest commercial gardening convention -- putting more and more pressure on Bayer to stop killing the bees. And we've got much, much more planned.
Right around the world, bees are dying off and the situation seems to be getting worse. In China, people are having to resort to hand pollinating. In the USA, hive after hive is collapsing. In Europe too, bees are dying off with whole hives dying in places like the UK, Poland, Switzerland and Spain. Our fight to save the bees is global but the first battle will be in Europe at the European Court.
It will be the people vs multinational corporations, the little guy versus the big guy, David vs Goliath. Bayer and Syngenta will dig deep and spend whatever is necessary to win. That’s why it’s so important we can build up a fighting fund so we can take on these corporate big boys -- and win.
Bayer and Syngenta are hiring the very best lawyers that money can buy. Can you help us fight back against them around the world by making a donation of just $1 today?
Court documents show how Bayer and Syngenta are going to try and get the ban scrapped. They will argue that there isn’t enough science to support a temporary ban. They are also going to argue that the European Commission doesn’t have the power to ban neonics. But we know on both of these counts they are wrong, but if we don’t stand up in court and say so, then there’s a real risk the court will only get one side of the argument. We can’t let that happen.
So we need to stand ready in case the court costs start to mount. Bayer and Syngenta have very deep pockets and will see the European ban on neonics as a huge threat to their profits and so will throw everything they’ve got at the upcoming court case. We need to make sure we’ve got enough firepower to fight back.
We know the fight to protect our bees from neonics is going to be more of a marathon than a sprint. Already, together we’ve achieved a lot. We came together to fight to stop Bayer pushing their disingenuous ‘we love the bees’ marketing campaign at a Chicago garden center show. Hundred of thousands of us have signed petition demanding big retailers remove neonics from their shelves. And most impressive of all together we chipped in to be able to participate in the European test case. While we can never match their near unlimited resources, being sure of our financial firepower will help us take the fight back to Bayer and Syngenta.
Can you help us with $1 to keep on fighting to save the world’s bees?
Thanks for all you do,
Martin, Paul, Johnny and the rest of us.

SumOfUs is a worldwide movement of people like you, working together to hold corporations accountable for their actions and forge a new, sustainable path for our global economy.
at December 29, 2013