Manitoba Doing Better Than Most in Conserving Woodland Caribou

A Greenpeace Cartoon for the Season 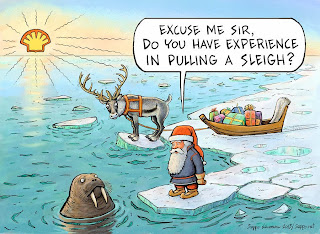 PLT: Arctic ice has increased, for now. But global warming  is not over, scientists warn.
Post a comment
Read more

What Would "Madiba" Have Done?

- December 17, 2013
by Larry Powell Prime Minister Harper's attendance at the funeral of Nelson Mandela has conjured up some fascinating scenarios for me. While South Africa's repression of its black people will live on in infamy, Canada's treatment of our own indigenous people has hardly been exemplary, either.  So, if Mandela, who so famously led his people out of bondage, were Prime Minister of Canada, what would he do here?  Would he be;  slashing grants to native organizations?  refusing to hold a public inquiry into murdered and missing aboriginal women?  passing legislation (using closure) which leaves traditional native territories vulnerable to disruptive and polluting projects? rubber-stamping expansion of the tar sands which has, for years, been sickening the people of the Fort Chipewyan First Nation, downstream with rare cancers and other diseases?  cheerleading massive pipeline projects that cross pristine wilderness and fragile marine ecosystems on the door
1 comment
Read more
More posts